Where now for Wolves Women?

Where now for Wolves Women?

Nicolas Andrews-Gauvain looks back on what’s been a fantastic season for Wolves Women, the club’s grow plans over the coming years and ways it can improve

Wolves Women have had what can only be, in the circumstances of a curtailed season, classed as an excellent campaign.

Unbeaten in the league, they had an excellent FA Cup run – beating two teams from the tier above, finally lost to a Championship (Tier 2) club having put in an excellent performance. Unbeaten in post season friendlies – including winning the “Pygott and Crone Cup”, by beating two teams from the FA’s Women’s National League (FAWNL) Northern Premier Division (Tier 3) and one Tier 4 team.  They capped off the post season friendlies in style beating Lincoln at the end of season at the Molineux, the first time that the team had played there in 19 years meaning that majority of the squad have never played there. This built upon the “season that never was”, where Wolves only lost once out of 21 league games.

The club has applied for and been successful in gaining promotion to the FAWNL Northern Premier Division.  When looking at the criteria (see @TalkingWoSo’s tweet on 23rd April for the criteria), it is clear Wolves should be promoted not only due to their on-field performance but also off-field. This is because Wolves Women (pre-Covid and subsequently post initial-Covid lockdowns) trained at the Club training ground at Compton (something several Women’s Super League (WSL) Team’s don’t have access to).  and have support from the club structure in terms of admin and finance – for example the broadcasting of the FA Cup games with both a Commentator and Co-Commentator/expert pundit (something that even the games on the FA player don’t have).  but also as Scott Sellars also noted, in the “Ask Wolves” series, that they have taken away the requirement to “pay to play”.  As to staffing/the workforce Macca (Dan McNamara, Wolves Women Manager) is an excellent communicator and leader, and with the wider support team has been great at helping Wolves Women develop. 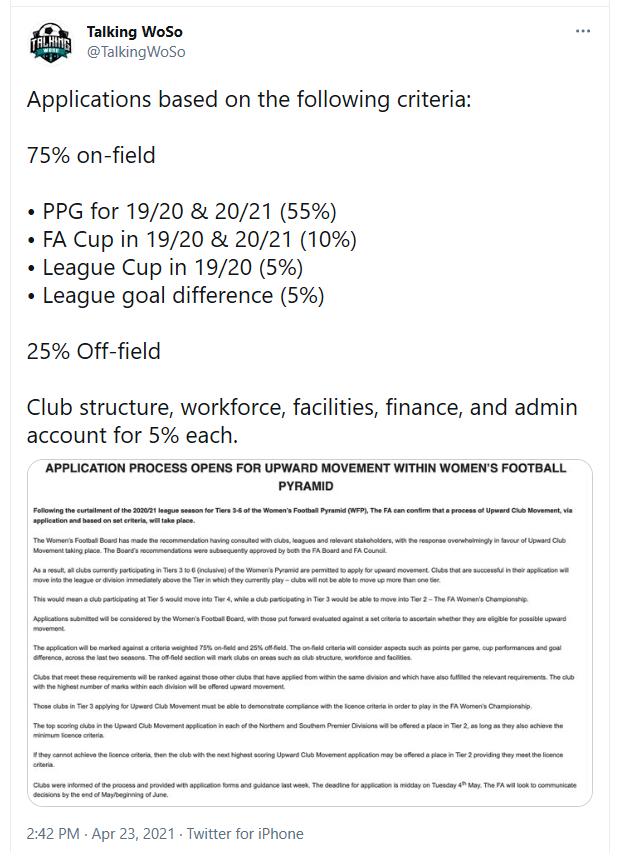 Whilst promotion is secure, what of the long-term future beyond next season?

It is clear that Macca has been planning for the “Northern Premier”, noting the team’s match performances and their domination of the league for the last two seasons. However, what about their wider development?

The Women’s team was discussed as part of the “Ask Wolves” Q&A between fans and the Wolves Management Board. It was chaired by Jonny Phillips [JP] with Scott Sellars [SS] and Jeff Shi [JS] answering the questions. 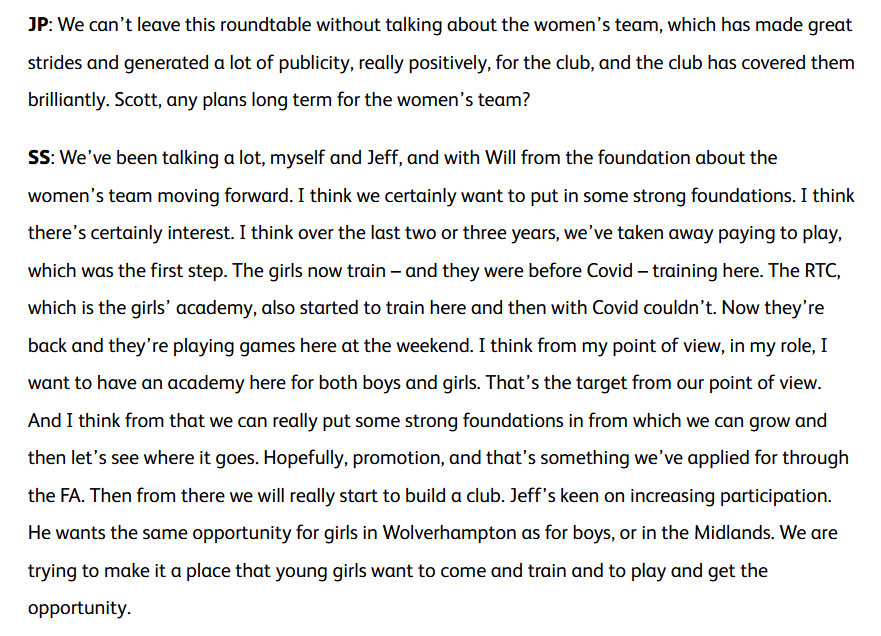 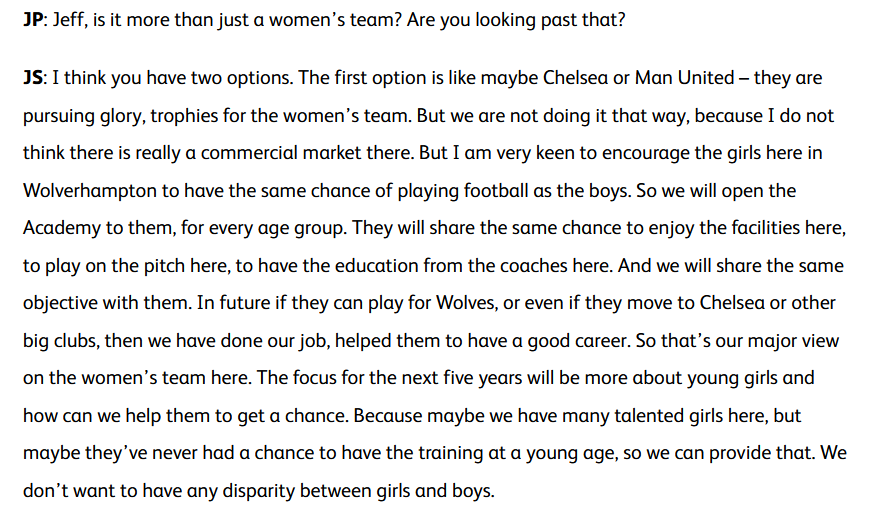 This was reinforced by Jeff’s “Final Word” in the last programme of the season where he stated that:

“We are very keen to encourage the girls here in Wolverhampton to have the same chance of playing football as the boys, which is why this summer all girl age groups will officially join our Academy.”

This is a big step going forward, in terms of developing the club structure. Whilst, as a Wolves fan, I would have loved to have heard Jeff say that we will be “Professional within 5 years, WSL within 10 years and Champions within 15 years”, his response demonstrates that Fosun has learnt from mistakes made with the men’s team where they perhaps over promised without fully understanding the challenges ahead (something Jeff acknowledged indirectly in the Ask Wolves series).

It is extremely easy to be negative about his response when you take that second and subsequent sentence of Jeff’s answer alone and out of context of the rest of his statement.  However, we need to remember that Jeff (& Fosun) are an investment business, they won’t throw money around if they don’t think that the return is going to pay back in a suitable period.  Noting that the TV deal which comes in next season only covers the WSL and the FAWNL is not professional, putting in place a structure that can develop top quality players for a couple of years’ time, whilst growing the club, is surely a better investment than just throwing money at it as Manchester United are currently trying.

However, this does not mean that there are not areas for the club to improve on its support for the women’s team….

Whilst social media content has been good and working with Derby University media students for match reports etc benefits football, it would be good to see a more active social media presence especially during match days. We lag behind some other, smaller, Tier 4 teams in terms of social media activities and certainly when you compare content such as in match tweets on goals scored etc. In addition, whilst the coverage (website/reporting/broadcasting/social media/etc) of the FA Cup run was excellent as a club, it’s disappointing they are not doing similar for the first Women’s game at Molineux in 19 years.  Being in Tier 3 we will be having Black Country Derbies again, as well as games against Stoke, Forest and Derby. These games (home and away) should be covered in detail with cameras by the club and hopefully the home game against WBA will be at Molineux).

With the new shirt deal incorporating the women’s team again and including targeted girls/ladies clothing it will be great to be able to buy a Wolves Women shirt easily (currently they are only available in store) and get the likes of Anna Price or Jade Cross’s name on the back.  There are two reasons for this:

On the pitch we have competed with Tier 3 sides this year and proved ourselves capable.  Whilst the league next season will be significantly more competitive than the last two seasons, I believe that Wolves Women can achieve mid-table with the squad that they currently have. Macca has also confirmed that there will be new signings to further strengthen the team and I could see that within a couple of seasons the team could be competing for the title. This timescale is important – the new WSL TV deal starting from the 21/22 season is a three-year deal and, when it’s re-tendered, will likely include the Championship.  With an increased number of professional teams in the Championship, it will be more commercially viable to be in the Championship at the start of that deal.

There is also work that the fans can do, particularly when the team are playing at home (assuming fans are allowed). With tickets being only £3/adult (20/21 season) and significantly cheaper than men’s tickets – why not get down there and support the team, especially for those Derby games!! If you want attacking football, they know where the goal is, having scored 37 goals in 6 league games and will only be aiming for more!